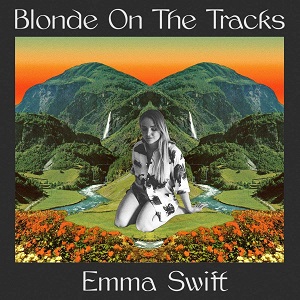 
Fans of Bob Dylan are currently enjoying something of a boom time . Hot on the heels of his new album "Rough And Rowdy Ways" and Spencer Leigh's authoritative new biography "Bob Dylan - Outlaw Blues" comes "Blonde On The Tracks" a collection of superb interpretations of his songs by Emma Swift.

During a period of writer's block , Emma began singing Dylan's songs "as a way of having something to wake up for". Emma has approached the songs from a female perspective and "Blonde On The Tracks" is the result.

Recorded in Nashville and produced by Patrick Sansone of Wilco, "Blonde On The Tracks" features an interesting choice of songs taken from "Blonde On Blonde" [ "One Of Us Must Know [ Sooner Or Later]" and the epic "Sad Eyed Lady Of The Lowlands"] , "Blood On The Tracks" ["Simple Twist Of Fate" and "You're A Big Girl Now"], "Highway 61 Revisited"[ "Queen Jane Approximately"] , "New Morning" [ "The Man In Me"], "Planet Waves" ["Going, Going Gone"] and , to bring us bang up to date "I Contain Multitudes" from "Rough And Rowdy Ways".

What makes this collection so impressive is that Emma really gets under the skin of the lyrics and sings them beautifully in a deeply personal and heartfelt way.

The album opens with a fabulous folk-rock version of "Queen Jane Approximately" which, with its jangly 12-string guitar sound harks back to the classic sound of The Byrds , with Robyn Hitchcock taking the part of Roger McGuinn. A glorious introduction to the album.

"I Contain Multitudes" is one of the highlights of "Rough And Rowdy Ways" and here Emma does it full justice with her achingly beautiful interpretation. Her fragile , exquisite vocals perfectly convey Bob's reflective ruminations on his life.

It's abundantly clear that Emma Swift has a real feel for Dylan's words. I particularly like her gorgeous version of "Sad Eyed Lady Of The Lowlands" , one of Dylan's greatest songs. Producer Patrick Sansone does a fine job of recreating the laid-back Nashville sound that permeated the original version on "Blonde On Blonde" in 1966. Although Emma's version is nearly 12 minutes long, it never outstays its welcome .

It might seem slightly odd for a woman to cover "The Man In Me" but a look at the lyrics shows that Bob was actually celebrating the fact that it takes a woman to bring out the emotions in a man. Whatever, Emma's version has a groovy gospel feel to it , with the churchy organ recalling Al Kooper's work on "Blonde On Blonde".

Similarly, "You're A Big Girl Now" is one of Dylan's most heartbroken songs and Emma perfectly captures the raw emotion of the lyrics.

On the strength of this lovely album, Emma Swift can be counted among the best interpreters of the songs of Bob Dylan. "Blonde On The Tracks" is a joy to hear , regardless of whether you are a Dylan aficionado or not.