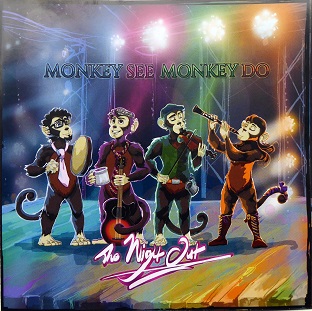 
The self deprecatingly named Monkey See Monkey Do, a quartet that emerged from Southampton's bustling folk scene five years ago, make a concerted claim for wider acclaim with the national launch of this, their debut album collection. And whilst their name may be inspired by the imitative skills of the simian order of primates, the eight tracks on The Night Out certainly go much further than merely repeating tricks learnt from others.

Perhaps nothing demonstrates this better than lead track 'Alexander the Great', a suitably West Country tale of one man's comeuppance after dreams of being a pirate go badly wrong following a drunken escapade aboard The Fox. Written by the band's guitar player and lead vocalist, Aaron Horlock, and arranged by the rest of the band, 'Alexander the Great' is an energetic shanty-styled ballad, enhanced by a lively chorus that satisfies both those with an urge to dance and those who prefer to wave their tankards in the air and slap the table rather than interrupt their drinking. And, with apt and skilful organisation of the track listing, 'Alexander the Great' is followed by 'W.S.W.D.W.A.D.J.N.L' the band's re-working of the traditional tale of Drowsy Johnny No Legs, also known to many of us as 'What Shall We Do With The Drunken Sailor', commencing with Sam Horlock's fiddle before developing into a stirring band sing-along.

Political protest and social commentary remain an integral part of folk music, and The Night Out opens with Monkey See Monkey Do's respectful arrangement of former Durham coal miner Ed Pickford's 'Pound A Week Rise', a song that criticises the low wages awarded to miners during Lord Alfred Robens of Woldingham's high-handed tenure in the 1960's as chairman of the National Coal Board. However. 'The A & E Tunes', which immediately follows, has nothing to do with the NHS but, instead, is an upbeat trio of reels in the keys of A and E drawn from compositions by Adam Sutherland, Dave Richardson and John McCusker. Later, Sam Horlock's own series of tunes, one of which inspired the album's title, is arranged by the band in a stirring 'before and after' celebration of drinking that becomes 'The Night Out & The Hangover'.

Charlie Winston's song , 'Like A Hobo', a rootsy ode to determination, truth and honesty, is given an almost Cajun treatment in the hands of Monkey See Monkey Do, with Sam Horlock's melodeon infusing a distinctly French feel to the band's interpretation of this modern classic.

Throughout the album it is Matt Aldous' bodhran playing that provides the percussive accompaniment, but his sonic armoury also includes cajon, cowbells, and rainstick, amongst others. The fourth member, Helen Gentile, who plays clarinet, takes the lead in June Apples, a light and lively tune of Appalachian origin and the first of two reels that are included in 'Superfly'. Her contribution to the band's sound cannot be overstated - it is a genuine delight to hear this instrument included in an acoustic folk line-up, and certainly gives Monkey See Monkey Do an originality that will endear them to listeners of 'The Night Out'.

Let us all hope that the release of 'The Night Out' is an omen of more good times to come, and that we will soon be once again able to enjoy bands like Monkey See Monkey Do back on the live music circuit. In the meantime, this makes the perfect accompaniment to a socially-distanced back-garden summer soirée.