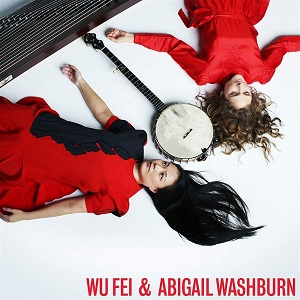 
On the face of it, this duo sems an unlikely prospect. But it turns out there are so many connections between these two musicians, who (coincidentally!) were both born in the same year (1977). Both are accomplished musicians steeped in their respective folk culture - Abigail will be known to many of you as a Grammy Award-wining ace banjo player who over the past 15 years has released three stunning solo albums as well as two in tandem with fellow banjo virtuoso Béla Fleck (producer for her current project). Wu Fei, however, will (almost inevitably) only be known to devotees of Chinese music, although she's enjoyed a roughly parallel career in building US-Chinese relations through music. She's a renowned exponent of the guzheng, a large 21-stringed zither-like instrument that is to Chinese folk music what the banjo is to Appalachian music; she's also a composer of works that assimilate avant-garde classical with folk musics. The two musicians first met at a bluegrass event in the mountains of Colorado in 2006, and have been firm friends ever since; thus, following parallel paths, it was inevitable that they would collaborate as a duo, and this album is the first fruit of that partnership.

Abigail's own music has been increasingly informed by her developing interest in, and appreciation of, Chinese music, while Wu Fei has taken much inspiration from Appalachian folk music in addition to embracing key elements of Chinese classical, folk and opera in her own compositions. Here on this duo album, however, they coexist almost symbiotically, and weave together in a truly beguiling mind-meld. There's striking evidence of this extraordinary phenomenon right from the start, though, on the CD's opening track, where the Wusuli Boat Song from north-east China (itself an adaptation of traditional tunes of the Hezhe/Nanai people) is sung in tandem with - and even for part of the time simultaneously with - the well-loved traditional song The Water Is Wide. This creative juxtaposition also enables both a more telling presentation of the thematic links between the two songs, and an extension of the underlying narrative import (here, The Water Is Wide is given as a story of the vulnerability and strength of motherhood).

This kind of intelligent combining of source material is a hallmark of the two musicians' approasch, and forms an artistic thread that runs through each track. Four Seasons Medley is a succinct yet poetic summation of seasonal characteristics and observations, complete with an attractive linking waltz-time tune. Better still is the widescreen ambience of the album's eight-minute centrepiece medley The Roving Cowboy/Avarguli, which after a commendably lengthy scene-setting guzheng prelude pits Wu Hei's Uighur song against Abigail's lonesome ballad "come all you rovin' cowboys" before fading off into the sunset. The limpid poignancy of Pretty Bird (which features characteristic, tender vocal register leaps set against guzheng glissandi) is complemented by fun material like Ping Tan Dance, a deliciously pointed early college satire composed by Wu Fei herself that features snarling spoken counterpoint and foot-tapping rhythms. There's also an instrumental Weaving Medley, four tunes containing some delectably nifty picking.

My favourite tracks, aside from the above-mentioned Roving Cowboy sequence, are the very sparsely accompanied road-song Bu Da Da, which is both impeccably voiced and eerily haunting (notably in Abigail's bluesy holler part), and the stone-hammering chant Ho Hey which morphs effortlessly into the oldtime tune Cluck Old Hen.

For first-time listeners who might at first feel "disoriented" (part-pun intended) by the slightly abrasive (to "western" ears) timbre of Wu Fei's singing voice, the most immediately accessible track is probably Banjo Guzheng Pickin' Girls, a swiftly dispatched rendition of a variant of Goin' Round This World (banjo pioneer Lily May Ledford's 1938 arrangement, with added Chinese lyrics by Wu Fei); this track more than any arguably illustrates an audible connection between the old-time and the Chinese musical idioms. There's also Who Says Women Aren't As Good As men?, a very short excerpt of yuju - aka Chinese (Henan) opera (no, don't switch off - it's sparky and enormous fun!) done a cappella.

Finally, I must heartily commend the superlative accompanying 44-page booklet, which provides essential ethnomusicological background reading together with full texts and translations for the songs…

This is a tremendously appealing CD, as well as a convivial and logistically sensible meeting of two wonderfully complementary musical minds. Unmissable.