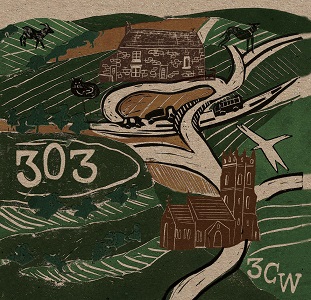 
Rather like the roll of waves on steep pebble beach that opens Quadrophenia by The Who, there is an evocative sense of place to the footsteps and gate creak that opens 303 by Three Cane Whale. The album was recorded in a series of locations in South Somerset by the Bristol based acoustic trio, with the sound of the ever present trunk road that titles it, threaded through.

"Shadow's Shadow" is a mandolin and birdsong overture for the lively "Island Of Apples" which is a dance between Pete Judge's very English trumpet, mandolin and guitar, a meshing of brass music and acoustic folk dance music. Rob Harbron's recording and engineering places you in the heart of events with a farming vehicle panning through the start of track three. "Frond" has its delicate melody picked out on the atmospheric bowed psaltery. "Cruc" and "Blackthorn Spring" twist together as a longer piece with another fine tune picked out by the instruments in a very live and real sounding space. Everything is incredibly delicate and surrounded by air, strings trill alongside the percussive sounds of the instruments being played and distant birds. Never library bird song sequenced and layered, but the sound of the world carrying on around the music. In "Blackthorn Spring" there is an element of Hot Jazz acoustic music to the picked strings of the mandolin.

The ambience of rain or wind that opens "Deadman's Hill" is as musical as softl mallets on cymbals, and Paul Bradley's guitar on his own tune is exquisite, but sadly cut short. "Crooked Bank" sounds like Gamelan inspired minimalism, with Pete Judge's percussion and a very percussive string sounds. "SS 91089 04944" is another delicious fragment, the tracks title being the grid reference of the listed St Thomas a Becket Church South Cadbury where the rolling mandolin solo was recorded. "Dark Lane" named for an ancient track way, sounds old, like an ancient music box, something lifted whole from a slightly gothic Bagpuss episode. There is a suggestion of the lightness of air against the solid slow tick and chime of a old clock. This is the slow paced and slightly melancholic soundtrack of sitting and watching the clouds and the landscape unfold in front of you.

Like the distant 303, this landscape is shaped by man and "Dark Lane" and Estovers are bridged by a field recording of moments one assumes in the Chapel Cross Tea Room. This is a journey through real spaces, not through idealised splendid isolation. "Estovers" is the ancient right of commoners to take wood for fuel and building from private land and this is another rich and ancient sounding tune, describing slowly building movement. Perhaps the right to gather was challenged and didn't go well on this occasion. "The Good Dark Of This Room", named from a line in a poem by Francis Horovitz, perfectly conjures the darkening tiny Chapel Cross, its pensive melody suggesting the end of light.

Like a musical easter egg "The Last Travellers Dream Under The Hill" is played on solo trumpet and is described as a pre-echo of a tune from the band's next album. As if after this album and that final melody we need the musical equivalent of a cliff hanger ending to make us seek out Thee Cane Whales next album. Linking the penultimate track and this closing track is the rising sound of car traffic, its difficult not to see an ecological note in the fact that the album is halted and the reverie stopped by a barrier of traffic, in those terms Pete Judges' trumpet solo gains the edge of a last post, leaving only birdsong behind as the album fades away.

Drawn in by the amazing lincocuts by illustrator Victoria Wilmott, this is a kind of musical concept album, a chamber folk version of hygge, South Somerset's instrumental equivalent of Under Milk Wood. There should be grants and awards for making an album like this. Folk's equivalent of Poet Laurette. It should be a TV show, thirty two minutes of landscape, spaces, musicians and print maker, not to suggest that there is anything missing, stop and listen and this is immersive, but it is so evocative it suggests pictures. You will not hear anything like this again this year.

If there was to be another series of The Detectorists, that very English 'slow TV' comedy, then Three Cane Whale should arm wrestle Johnny Flynn for the job of providing the incidental music. The reflective, languid hazy english summer melancholia of Paul Bradley, Pete Judge and Alex Vann would be perfectly suited.