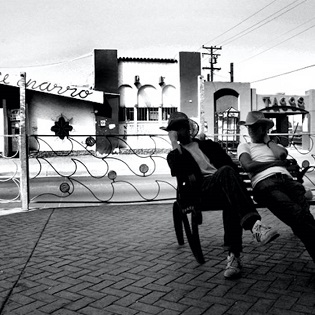 
I have to admit that I had not previously heard of The Furious Seasons, an acoustic trio from Los Angeles , even though "La Fonda" [ "The Inn"] is their seventh album. The band consists of highly regarded singer/songwriter/guitarist David Steinhart , his brother Jeff Steinhart on stand-up bass and Paul Nelson on guitar and vocals.

"La Fonda" has a most interesting concept : it is an entire song-cycle of ten songs that David has written as a tribute to a close friend [ also called David] who died from the ravages of alcohol.

The songs chart the friendship from its beginning to its ultimate, tragic conclusion.

That may sound like a recipe for a gloomy, depressing record but that is not, in reality, the case at all. Yes, there are melancholy moments but on the whole this is a heartfelt and eloquent tribute to a fallen friend.

The Furious Seasons' trademark sound consists of delicately interweaving acoustic guitars and subtle harmonies , topped off with the distinctive voice of David Steinhart, which , at times, reminds me of Tom Russell and also Neil Diamond.

The album begins with "As A Matter Of Fact" which sets the scene by describing how easy it was for his friend to fall prey to the attractions of Los Angeles' nightlife , especially as "you are so easy to distract".

"Figure It Out" describes how his friend "flew off the track" and how the narrator feels guilt over how he "could have done what I should have done". The narrator's feeling

of guilt is a recurring theme , particularly in "I Was An Actor" , an upbeat , dobro-driven country shuffle and "Slide Into Sadness" a song of deep regret in which the narrator blames himself "for things I couldn't see" and comes to terms with the fact that "it was no help to you knowing me". The melancholy atmosphere is echoed by an emotional guitar solo and accordion.

"Vast Divide" is , somewhat incongruously, an upbeat , catchy song about the friend's passing and how the narrator will "cross that street" and they will meet again "on the other side".

"Your Irish Funeral" imagines a funeral [ not the actual one] where all the people the deceased knew were drunk and happy and singing his favourite songs.

The album closes with "I Want To Be Sure" in which the narrator is concerned to be sure that "he remembers it right" , and that he "remembers the warmer side" of his friend.

In conclusion, I have to say that this is an excellent album. On first hearing what draws you is the superb sound of two beautifully played acoustic guitars in harmony but once you listen to the lyrics you realise that there is a whole lot more to the album. The finely crafted lyrics are at once deeply personal yet very clear and direct. Through the ten songs, David Steinhart lays bare his emotions about the loss of his friend in a most eloquent way. This album deserves to be heard.

As A Matter Of Fact