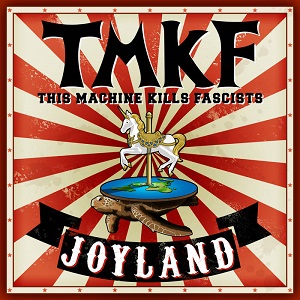 
The Lowestoft band's name comes from the inspirational sticker emblazoned on Woody Guthrie's acoustic guitar. Its sentiment carries right through "Joyland", an excellent album in a true punk spirit that I thought had long since died: straight between the eyes. Woody's message lives on.

Now try finding out about TMKF online. You will struggle. Their presence is limited to their Bandcamp profile and a Facebook page. These themselves contain very limited information about the band in a kind of two fingered gesture to the online world. That confidence exudes in this energetic album. It's in your face, unapologetic, and liberally scattered with expletives, and it's also fun and frankly should remind us that back in the late '70s a youth movement scared seven bells out of the establishment.

I've always wanted to write a song like "Kill The Fascists". The songs starts with a nod to skiffle, by 20 seconds in the ska influence is there, then bang into the lyrics within 30: "Turning on each other like animals / Feeding off the people like they're cannibals / What a sorry state that we are in". The title is the chorus and hits by the 40 second mark. If it feels like an assault, then it's achieved its aim.

The Bo-Diddley beat that introduces "Liberal Lefty" gives you the tempo for a track whose lyrics identify with "liberal lefty Guardian reading muesli eating" hippies. It positively bounces along: "I'm a member of the Green Party and want to save our planet / They love us down in Brighton but not Yarmouth nor in Thanet" referencing Ian Dury's song "Tricky Dicky". "Welcome To Dystopia" dishes it out to the racists and narrow minded who can't seem to cope with difference "Because you're not from round here and you don't live like them" and shows the quality of Roop Murphy 's voice, ending the song with a Middle Eastern vocal touch.

"England Uber Alles" laments the direction which UK politics has taken recently, and the isolation that will come from divorcing ourselves from the world's largest Customs Union….or rather the fabulous friendships that British people have built with their European neighbours. It really does feel that we live in two countries just now. The frenetic pace slows with the dub reggae track "I Smoke Da Ganja", cleverly and rhythmically listing just about every pseudonym ever given to cannabis over the years, in a true piece of punk poetry.

I'm not going to insult the band by trying to interpret "Punch A Nazi In The Face". It needs no interpretation and I am sure its sentiment will resonate with many listeners! I'm already a fan. I'd heard of TMKF before but this is the first time I've ever heard their music. It provides a reassurance that there are people out there just like you who also won't be taking the current parlous state of British politics lying down. "I'm So Bad" starts with an almost Rockabilly feel, but quickly metamorphoses into a vibrant punk-ska track, and oddly feels like the most commercial song on the album, with a catchy chorus and you can instantly hear the live audiences joining in.

"Fake News" has become a theme of life as nobody really knows what to believe anymore. It's a positive thing that band like TMKF and Ferocious Dog highlight through their music what has become a real problem in society as journalists scrap to be first to break a story and social media users scrap to be first to share it without first checking its validity. The song positively chugs along and is for me the album's stand out song. 'The Grand Parade" is driven by a rumba influenced guitar riff and Latino fused brass accompaniment. "They're burning all the bridges and they're putting up the walls / They're locking us all in, they've got us by the balls" expresses the feeling so helplessness and frustration that many of us feel that we have little control over what our increasingly right facing politics is taking.

A critique of social media follows with "Facebook Meltdown" and more rockabilly influenced rhythm guitar, starting with 1.2.3.4. and having a comedic Jimmy Pursey feel to it. The album continues with "Up And Down" with descending brass populating the song between verse and chorus, and some terrific bass playing throughout. The Stray Cats rhythm of "Die For Us" brings the album to a close and leave the listener breathless in a way that you generally feel after pogo-ing your way through a 40 minute punk gig. Punk will never die.

Punch A Nazi In The Face