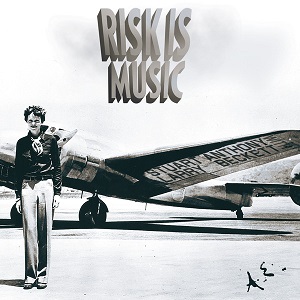 
"Risk Is Music" is the latest collaborative work by American poet and lyricist Larry Beckett and English songwriter and musician Stuart Anthony.

Larry may be best known to you as the songwriting partner of the late, great Tim Buckley , penning such classics as "Morning Glory" and " Song To The Siren".

Larry and Stuart have previously worked together on two critically acclaimed albums, "One More Mile" and more recently, "Love And Trial" , which blended Greek mythology , poetry and traditional Greek instrumentation.

Their latest collaboration is a four track EP , "Risk Is Music" , in which they pay tribute to the female aviation pioneer Amelia Earhart who went missing over the Pacific Ocean in July 1937, aged 39.

The words to three of the songs on "Risk Is Music" are taken from Larry Beckett's epic poem about Amelia Earhart which is part of his "American Cycle" , a series of long poems on pioneering heroes and charismatic places from America's past.

Stuart chose three passages from Larry's poem and set them to music [ he also plays all of the instruments].

The EP begins with "Blue Flight" , with sound of an aero engine . The lyrics convey the sense of loss and confusion over Amelia's disappearance , with the realisation that she has gone "in the white noise tonight, unknown ! in air , history, lost". As if echoing her final moments, the song becomes more distorted as we hear the plane dive into the sea to join the "legends, sea serpent, mermaid". The words and music brilliantly capture the moment of descent into oblivion.

In contrast, a gentle piano ballad , "Skywriting" describes the excitement and sensation of flying ... " oh, hallelujah motion" to be "led on by the horizon".

"Air Heart" superbly expresses Amelia's daredevil spirit of adventure ... " I jaywalk where my heart leans". Amelia knows the risks she is taking " I know what's on the line" but she doesn't care ... "but la-de-da" and goes "on walking out to the lovely airplane". Unfortunately, never to return.

The final track on the EP is a cover of the well-known 1950's hit song "You Belong To Me" , which Jo Stafford took to number one in 1952. Like Amelia , Jo was something of a pioneer as she was the first female artist to have a number one record on the UK singles chart . Stuart and Larry chose this song because it contains the line "fly the ocean in a silver plane" but , unlike the subject of the song, Amelia did not come "home again".

"Risk Is Music" is another admirable collaboration between Larry Beckett and Stuart Anthony which acts as a fine tribute to one of America's great heroines.