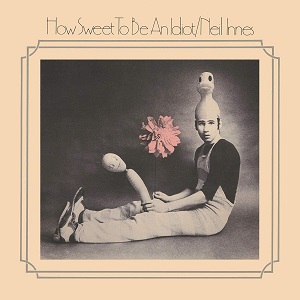 
This latest CD reissue of Neil's somewhat underrated 1973 solo album makes for a fine tribute. Neil, who died less than six months ago, right at the end of 2019, was best known for his comedy-tinged music, especially during his early career with the Bonzo Dog (Doo-Dah) Band, where he wrote their hit Urban Spaceman and countless other brilliant songs and pastiches. But even during that time, he was writing pleasing and well-crafted "straight" songs like Quiet Talks And Summer Walks.

Work on the How Sweet To Be An Idiot album began around a year following the demise of the Bonzos, and shortly after some of its projected songs were outed on a John Peel radio session. Neil used Andy Roberts and Dave Richards, musicians who had played on the 1973 tour of Bonzos-Scaffold hybrid outfit GRIMMS, together with multi-instrumentalist Peter "Ollie" Halsall and drummers Gerry Conway and Mike Kellie. In spite of its ever-so-slightly silly title, How Sweet To Be An Idiot was a persuasive set of "proper" songs (i.e. largely serious as opposed to comic, yet also slightly whimsical), songs that demonstrated Neil's not inconsiderable songwriting talent. He said at the time "I'm really working towards a situation where I don't have to be funny. I just want to get through; that's all that matters to me." Fair enough - but he couldn't help injecting his customary warm humour and pathos into these songs, another element of their appeal. Musically, the idiom was something approaching an intelligent mix of Elton John, Randy Newman and late Beatles (Feel No Shame really rocks), all Neil's own compositions except for one co-write with Roger McGough (the cajun-rocker Momma B). Sadly, though, despite its keen melodic interest and strong commercial potential, the album was all but ignored, as was a strings-backed mix of the title track released a single to court chart success.

Neil then spent some time helping out with Monty Python projects including the Holy Grail movie, thence BBC2's Rutland Weekend Television (whose theme tune was a revamp of Idiot's singalong track L'Amour Perdu). Perhaps inevitably, then, his next three releases, all 45s, fell into the sphere of borderline-novelty (as opposed to straight comedy) records. The first of these, Re-cycled Vinyl Blues, was a priceless classic of the must-be-heard variety - boasting similar production values to Roger Ruskin Spear's brace of almost contemporaneous solo albums. Other clever tongue-in-cheek artistic triumphs released on these obscure singles included Fluff On The Needle and Bandwagon, and Neil's final fling with United Artists was the tongue-twisting one-liner What Noise Annoys A Noisy Oyster.

Neil's fate in the success stakes was destined to be "lie down and be counted". A rather neglected talent, but one remembered with much affection and respect. This gloriously complete collection of Neil's early-70s records for the United Artists label, with How Sweet To be An Idiot as its centrepiece, comes with a superb booklet essay, and sure does his memory proud.

How Sweet To Be An Idiot