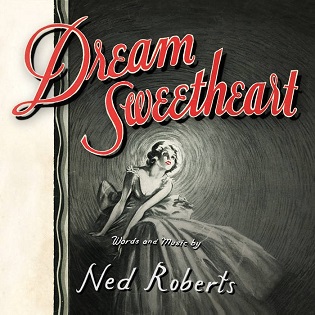 
DREAM SWEETHEART is Ned Roberts' third album and it builds perfectly on the atmosphere and richly classic singer songwriter sound of his eponymous second album. Like an english Ryley Walker he spins together free wheeling troubadour with a slice of modern edge and studio pizazz.

This is an album about space, the huge space on "Falling Away" that allows Ned to just soar, part Buckley glorious warble part Paul Buchanan's melancholic restraint. Luther Russell's production is wonderful, bringing together very English strings, crisp Blue Nile percussion and that stunning voice. This is also an album of contrasts, on "Miles Between" atmospherics, a Neil Young harmonica and acoustic guitar create a more pastoral space. Just a touch of studio sparkle and Ned is an English James Taylor, crooning in your ear. "Wrong Side Of You" is upbeat jangling guitars on quite an angry song that just dances along. "Cradle To The Crow" is another nuanced vocal given space to shine. Roberts' picked guitar shines creating atmosphere, but the star is that beautifully slurred and bruised voice. "Stay A Little Longer" continues the acoustic reverie, rain and a passing train build atmospheric space around Ned's spry guitar. This is a track that captures a moment and one you'll listen to over and over, it is so cinematic. "The Root" expands that atmosphere with funky bass and drums that could be lifted straight off Neil Young's HARVEST. Ned's almost falsetto vocal and electric guitar notes are so soulful and full of life. A looped nightingale accompanies Roberts' voice and guitar on "The Songbird", layers of percussion building sparkle and keeping everything moving. "The Arbour" is beefy Americana with more than a touch of late 1960's Dylan conjured by Ned's vocal, the keyboards and the retro guitars. "Slower Than The Sun" is a final beauty. Like the final track on Ned's debut album it is built round a percussive guitar sound and a hypnotic vocal from Sarabeth Tucek. This is a modern twist on something that gloriously revels in a John and Beverley Martyn "Auntie Aviator" or BLESS THE WEATHER vibe. Another nuanced and layered song I could have listened to all night.

This is a set for anyone who wants to surround themselves with a master musician and songwriter running with, and breathing life into, that early 70s tradition. It's a collection of songs from a performer whose voice inhabits and nourishes a lyric. It is a classic in the making.