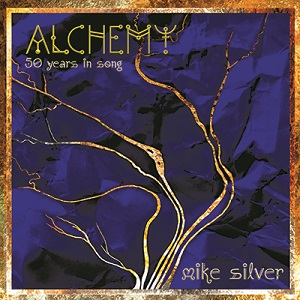 
Now 73, Uffington-born Silver released his debut EP, The Applicant, in 1969 and has been working the folk scene ever since, notching up roughly twenty or so albums in the process, though, frustratingly, never finding more than loyal niche following. To mark his career half-century, this latest compilation cherry picks from across those releases, kicking off in 1994 with 'Walk Away' from Dedication, a catchy, folksy pop leaving song built around the "let your feet do the talking" refrain and featuring the late Al Hodge on electric guitar.

Ku Suma, from 2000, contributes two numbers, the gentle fingerpicked ballad love song 'Pollyanna', a number that suggests he may well have been an influence on Reg Meuross, and, featuring hap, pedal steel and hurdy gurdy, the fingerpicked seven minute 'Elaina', a true story of a fleeting connection with a singer in a cabaret bar band.

How Many Rivers gets the lion's share of selections with four tracks, the country blues lazing lope 'Oh Doctor', described as being about the sort of bloke who "associates himself with you whilst getting up everyone else's nose" with Nancy March duetting on the third verse and Johnny Coppin on piano. Also with an easy rolling bluesy sheen, 'JCB' was inspired by a widower who remarried a girl 25 years his junior, applying the titular nickname on account of his she loved digging in the garden. The album's title track is a folksier slow sway about screwing up a relationship by speaking his mind when he should have stayed silent and wishing for a second chance.

My personal favourite of the four though is the Jackson Browne influenced 'Dove and the Dolphin', a song about how in 2003, funded by Devon surgeon David Halpin, Cornish folk singer John Maughan sailed out to Gaza on a cargo ship to take clothing and medicine to Palestinian children, Johnny Coppin duetting on a poignant song of humanity and compassion with the memorable refrain "we're taking aid not taking sides."

The most recent track, recorded for 2012's 'Jack Dances' and featuring just voice and guitar, 'Not For You' is a personal song about his daughter growing up and needing to be left to make her own decisions. Again just voice and acoustic guitar, it's back then to 1997 and Heartland and the slow waltzing 'Wrong Side of Midnight' about adultery and screwing up trust in a relationship that sports the great line "it's the limo for him and limbo for her."

In 2007, Silver teamed with Johnny Coppin, on harmonies and piano, to record Breaking The Silence, from which comes three songs, the first up being the bittersweet 'Not A Matter of Pride' about a marriage on the brink even though neither want it to end; one of his finest songs, it again comes with a memorable and incisive line about how "when people get close they sometimes collide." With words by Silver and music by Coppin, the second is 'This Heart Sings', a simple, almost hymnal duet dedicated to and about the late Silvie Smith who ran the Castle Hedingham Folk Club, Again prompting a Reg Meuross comparison with Coppin on counter melody vocals, the other is the title track, another politically-informed number about how history repeats itself inspired by a documentary about the persecution of the Jewish people of Europe in the 30s and 40s, that, twelve years on, has strikes a timely note about the upsurge of anti-Semitism.

There's two live numbers, both lifted from 1990's Roadworks. Opening unaccompanied, 'Pretoria' is an anti-apartheid song about the oppression of the South African government inspired by the film Cry Freedom and the Soweto massacre, while, originally featured on 1984's Double Back, the circular fingerpicked melody and cascading chorus of the warm James Taylor-ish 'Old Fashioned Saturday Night', featuring harmonica solo, was written during a thunderstorm while he was living in Holland back in 1978 and suffering from laryngitis and final demands from the taxman.

The remaining number also hails from Double Back, the earliest album represented. Featuring Jo Partridge on electric guitar and keys and one of the few numbers to feature drums, 'Nasa' is a bluesy, slightly Peter Gabriel-like number written in response to the loss of the Challenger space shuttle and the subsequent cynical view that state investment was more important than lives lost. Ah, but hang on, there's also a hidden bonus track, a live Roadworks recording of 'Angel In Deep Shadow'.

Silver admits he's not the best self-publicist, resulting in his "absurdly low profile", but those who have discovered him will attest he's one of the best kept secrets in folk. Hopefully, this album might go some way to sharing that.