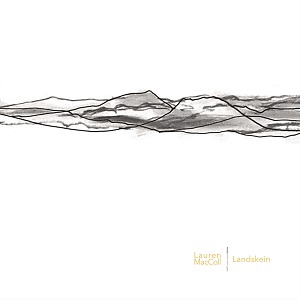 
In this latest instrumental collection, which takes its name from an art term for the weaving and braiding of horizon lines (where the outlines of several hills or mountains are simultaneously seen, but with each becoming paler than the last as they become more distant), Highland fiddle player Lauren MacColl creates a sonic landscape that encaptures not only the vastness and variety of the Scottish countryside, but constructs an emotional lifeline of intertwining memories as she makes her homeward journey back to Fortrose in the Black Isle.

MacColl has justifiably earned her reputation as one of Scotland's most expressive and engaging fiddle players, with a passion for, and extensive knowledge of, traditional Celtic music. Landskein is her first album release since The Seer in 2017, a work that was originally commissioned by the Fèis Rois to celebrate their 30th anniversary, and which featured five fellow musicians including Rachel Newton on harp and vocals. MacColl regularly performs with Rachel Newton's band, as well as in a duo with piper and wooden flute player Calum Stewart. She is a founder member of chamber-folk quartet RANT and also of song-trio Salt House, and generously shares both playing skills and technical knowledge with attendees of her annual Black Isle Fiddle Weekend, hosted each July in Cromarty.

The recording process for Landskein could not have been more of a contrast to her performance of The Seer. Decamping to the hills high above the north side of Loch Ness, and armed with a collection of songs, some sourced from The Simon Fraser Collection of Ancient Airs 1715-1745, the recordings for Landskein were completed over the course of four days last November. The location was the Abriachan village hall, a building of corrugated construction but endowed with fine acoustics, and where MacColl first remembers hearing the elemental power of an unaccompanied fiddle. The short daylight hours, and the crisp winter landscapes can only have added to the sense of isolation and inspiration for the sesions. She was joined by pianist James Ross whose subtle, sensitive accompaniment can be heard on four of the tracks, and by producer and recording engineer Barry Reid.

The result is a stunningly atmospheric piece of work - a personal journey, curated with a clearly defined start and finish, and with a memorable catalogue of characters and stories along the way. This rich thread, that begins with a melancholic love song to the Black Isle ('Air Mullach Beinn Fhuathais'), and ends to the Southwest of Edinburgh in 'Pentland Hills' and its final ascent to admire the views ('Là Dhomh 's Mi Dìreadh Bealaich'), provides Landskein with a unique musical geometry and flavour. James Ross' elegant and deft embellishments gently enhance the poignancy of two laments ('Mo Chràdhghal Bochd', and 'MacGregor of Roro's Lament'), which are placed in between the lively protestations of 'Put The Gown Upon The Bishop' and a reel that reincarnates the memory of 'Mrs McIntosh of Raigmore'. Elsewhere, 'Lal, lal Said the Old Woman / Old Man of the Garden' and 'An Untidy Witch' conjure up images of the wild herbs and flowers gathered to provide material for both medicine and magic.

Landskein truly flows from left to right, just like the overlaid lines, like sonic traces, that become scenic ranges in the stunning cover artwork by Mairearad Green. A true celebration of the landscapes of Scotland, and the history that lies within.