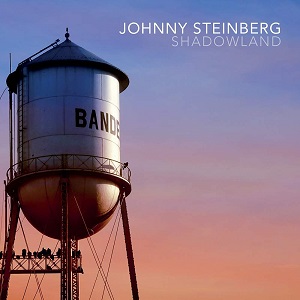 
"We are so scared of being judged that we look for every opportunity to procrastinate." This quote appears in the introductory sleeve note to Johnny Steinberg's debut album 'Shadowland' and is attributed to Erica Jong. It sets out the course for this well-crafted album with its themes of moving on, riding the current and working life out. The upbeat opening track 'Holding On' makes good use of simple and effective percussion launching us into the rough and readiness of track two 'New York Tooth and Claw': "these are not scars these are souvenirs". Travel and movement feature heavily and in track three we hear how Pamela runs from the reality of life "spin the wheel and take the drive". A change of pace brings 'Set Sail and Go' whilst 'Dance Away the Darkness' talks of moving through the night "We'll keep on keeping on" to avoid the darkness. In 'Carrie' the protagonist is "looking for a way out" before she finally hits the road. 'Man on Wire' brings dreams of flight whilst in the final track 'England' contemplates the need once again for "moving on".

'Shadowland' presents a series of stories, where some journeys are welcome and many less so. It is hard to know whether these reflect Steinberg's own experiences of journeying (at the time of writing his website was not available) although the sleeve notes hint at travel with recording credits in Nashville, Denmark and the UK. Nonetheless a number of the songs feel incredibly intimate; Steinberg's unique vocal is speech-like and the lyrics so heartfelt it feels impossible they were written by anyone who didn't experience the events.

Exceptions to the theme of journeys are 'Jesus in Shades' about a profound, drink influenced event and 'Man on Wire' with its intriguing lyric "You're breathing like a Buddhist in a dentist's chair". These more sedentary moments suggest a need to find a space and perspective in an otherwise turbulent existence - instances of optimism when "Your wild outrageous dream, comes through" living for the moment because "In the long run, there's no long run".

With Boo Hewerdine as his "wing man" (sleeve notes) this album was perhaps a predictable success from the first stages of recording tracks in Nashville in 2016 through its long journey to completion. Commended by one of my favourite songwriters Karine Polwart, it didn't take long to identify which track might have "made [her] cry on the first listen".

I could hear Hewerdine's influence in the piano accompaniment for 'Set Sail and Go' and whilst Hewerdine contributed a number of instrumental parts to the recording, on this track the piano was performed by Steinberg himself. The rhythmic guitar parts on 'Hey Now Pamela' and 'Carrie' are attributed to Hewerdine and the unexpected chord patterns on 'Carrie' which kept me guessing are reminiscent of Hewerdine's style.

Each track benefits from its own emotive treatment and this album certainly avoids repetition with each adding something different to the whole. Magic moments for me include the fluttering strings (contributed by Gustaf Ljunggren) at a poignant moment on 'Set Sail and Go', the swirling lap steel guitar (also Gustaf Ljunggren), the relentless fiddle hook (from the versatile Mark Jolley who also contributes bass guitar to the album) on 'Dance Away the Darkness', and the syncopated saxophone (from John Temple) on 'Carrie' instilling a sense of calm and optimism. Backing vocals are provided by Kira Small which is an inspired collaboration, with Kate Heaton and Carole Lea also making contributions on a couple of tracks.

Storytelling lies at the heart of each of Steinberg's songs and there are no formulas. Deliberate use of internal rhymes and partial-rhymes ensure the lyrics flow seamlessly. For me 'Shadowland' offers more than the average 'singer-songwriter' album because of its thematic cohesive nature and its masterful engineering which combines simple acoustic instruments (for example the piano driven 'England') and tight backing vocals with synthetic instruments such as the 'electric digital-delay banjo' on 'Hey Now Pamela'.

This is an album for listeners. Despite its powerful honesty and courageously personal offerings ('Shadow of a Man' is notable for its uneasy absence of resolution) there's no self-indulgence. The stories are intricately formed with a scattering of detail but enough space to invite interpretation. The most hard hitting moment "It's like your hand's on the tiller and life brought you back" ('Set Sail and Go') is as extreme in its sincerity as any I have felt when listening to a recording. This debut must surely propel Steinberg to greater notoriety.