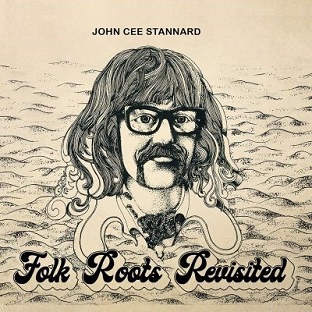 
John Cee Stannard was a founding member of Tudor Lodge who briefly counted Linda Peters, subsequently Linda Thompson as a member and before that released one highly collectable album, on Vertigo, before disbanding. During the 80s John toured and recorded with a new line up Tudor Lodge as well as exploring the blues with a series of fine albums. FOLK ROOTS REVISITED, with a cover that features his drawn portrait from that rabidly sought 1971 Vertigo album sleeve, is John revisiting the music he was listening to at that time and drawing on a collection of songs stretching back over forty years. John Cee Stannard, having survived skin cancer in 2004 was diagnosed with Stage IV liver cancer and sadly died in March 2020. John was upbeat describing the 10 months skilled treatment gave him, as enriching and triggering a creative flood that led to recording three albums, a final Tudor Lodge album, Life Goes On, a blues album, When The Time Is Right and this folk album.

The whole album is a well-crafted labour of love, with John's fascinating notes on the songs to inform us. "High Hill" written during in 2012 during the recording of another album is a janty Journeyman reflection on work. "Lovely Day", written in 71 for the never recorded second album by the original Tudor Lodge, is a delightful bucolic reflection, it reminded me of the pastoral moments on David Gilmour's Island album. Simple pleasures are explored in this timely and reflective song. Sean Robinson's jaunty percussion on this and "If Only She Were Here", the other Tudor Lodge era song, keeps everything moving and the flute is a welcome nod back to the spirit of 71. Given John's condition through the recording sessions many of the songs have a very english touch of reflective melancholia, even lyrics written years before are given a poignancy and power. "No-one There" is a beautiful folk blues, with lyrics about dealing with absence and fine harmonica accompaniment by Howard Birchmore. "The Ultimate Innings" is about Cricket, but glows with philosophical end of life reflection. "The Last Time", written against the clock on a writing workshop is an achingly tender love song to John's wife Angie. Alive with the power of traditional music and a stripped back arrangement, "I See A Boy" is the most folk performance on the album, a seething reflection on old age inspired by a poem and one of many highpoints. With a gently picked guitar motif, "The Ferryman", a song about life's guides has the feel of an early 70s Pentangle or Bert Jansch song. It's classic status cemented by the little lift from "Summertime" by the strings. "Shades Of Grey" is unashamedly and deliberately Dylanesque, the cadence of the lyrics, the voice, the dense metaphors nod to him and not that tediously smutty book. "Silver Chalice" a song that describes, in detail, a trip to find a silver cup, said to be have efficacious effect on water drunk from it, ends the album on a forward-looking positive note.

Sadly, we the listener know how the story plays out, but there is joy in the telling and a poignancy in the listening. There is a certain sadness discovering that such a charming, lively album is John Cee Stannard's final revisit to his formative folk roots, but it's a great listen, alive with charm and warmth and an example to us all.

I'll Take Care Of Mine