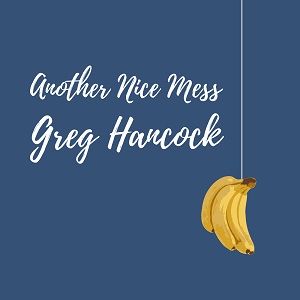 
There's some lovely playing on this.

Greg's acoustic guitar and vocals blend perfectly with the sympathetic and exceptionally tight stand-up bass playing of George Arnold on Don't Expect It All to Make Sense and the title track Another Nice Mess.

Lukas Drinkwater takes over bass duties for The Water and Headlong and does a great job on harmonies. Headlong also has very gentle electric guitar and keyboards tracked in by Lukas.

In the vocal department, Greg more than ably acquits himself and he has an enviable right-hand technique on the guitar.

The production is spare and clear, mostly an object lesson in interweaving two instruments and voice to maximum effect. The notable exception is Headlong which, although at bottom a traditional-style song, definitely has a broader commercial potential than the rest of the EP.

The songs are of that type which you kind of like the first time you hear them, but which grow on you with every subsequent listen.

The interplay on Don't Expect It All to Make Sense was reminiscent of those great early John Martyn and Danny Thompson tracks - the same kind of "snatched" guitar and counter-melodic bass.

The same goes for the title track - there's a beautiful long instrumental intro that is a number all by itself, and we can all relate to the lyric which points out that it's not necessarily a good thing to have the right in an argument if you want to hold the relationship together.

The Water is another song examining the nature of commitment and acceptance. Again, the interplay of the musicians sounds almost telepathic. I'm also impressed by the fact that I could make out all the words of all the songs - good diction being a bit of a rarity these days!

I have only one wee criticism of this EP: George Arnold's bass has a lovely full and present sound that really does recall Danny Thompson, but, when we move to the second half, Lukas Drinkwater's bass is mixed further back with a slightly thinner sound. It would have been nice to hear it brought out of the mix a little more. But, as I said, that's a small point. Overall, this is a lovely piece of work by Greg Hancock and his two collaborators.