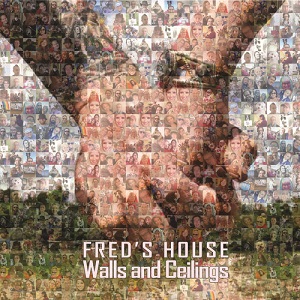 
Folk-rock favourites Fred's House celebrate a decade of making music with a brand new four track EP, their first release since a personnel shake up last year brought in violinist Prue Ward (formerly of The Willows), and saw the departure of founder singer and songwriter Griff Jameson. Over those last ten years, Fred's House released three full length albums, as well as a number of EP's, singles and live recordings. They clocked up more than 600 gig and festival appearances, and grew a loyal and enthusiastic following of 'housemates' that extended well beyond their native Cambridgeshire. 2017 even saw them take part in a 13 date tour of China as part of the Nanjing International Music Festival.

Their popularity was due in part to the song-writing partnership of Jameson and Victoria Jones, both of whom would take on lead vocals but also combine as a charismatic duo. Meanwhile, guitarist Lachlan Golder, bass player Gafyn Jameson and drummer Paul Richards reinforce their West Coast folk-rock sound, adding backing vocals and creating harmonies. Comparisons with Rumours-era Fleetwood Mac were obvious - Fred's House songs consistently featured strong melodies, and embraced a varying palette of tempo and mood - everything from sensitive love songs to up-beat alt-rock anthems.

The new line-up means that a change in dynamic is inevitable, especially as violinist Prue Ward was not a like-for-like replacement, leaving Victoria Gavin to front the band, as well as playing keys. The result, though, is a sparkling sound that now seems brighter, and with a new edginess. The new songs bristle with a confidence that reinforces a new-found certitude, and taps into a fresh seam of energy and inspiration.

Recorded at North Acre Studios with producer Jake Day, the four new songs play to the strengths of the new line-up, harnessing themes of new beginnings and linking them to a running narrative. Victoria Jones teamed up with guitarist Lachlan Golder to write the title track. Partly inspired by the confines of lockdown, Walls and Ceilings pulls no punches as it explores the challenge of negotiating new relationships. It is a rocking slice of retro Americana with more than a passing nod to Bruce Springsteen, Golder's guitar leads the assault whilst Gavin's country-tinged vocals seem to be pitched somewhere between Lissie and Sheryl Crow.

By way of contrast, Worlds Apart is a delicate, gentle reflection on desire, co-written with Alan Clarke, a song that reminds of Tapestry-era Carole King. Confessions of unrequited lust are revealed to a contemporary, if cautiously subdued, folk-rock accompaniment.

Steal The Night is a mid-tempo pondering that revolves around questions of commitment. 'Help me out, what can I do?', sings Gavin as the violin offers up a chirruping rhythm, to which Paul Richard's drums and Gafyn Jameson's bass respond with prudent accompaniment, restoring a sense of balance and rationale.

The final track is the moving Only The Sun, a measured and reflective acceptance that time and people move on. Guided by an ebbing lament on the violin, Gavin's voice floats and hesitates before climbing to an uplifting finale that builds to a dramatic and emotional conclusion.

Changes in personnel, and the effects of the prolonged lockdown are challenges that could easily have disrupted the creative momentum of any group of musicians, but Walls and Ceilings is a determined and confident statement of intent, a demonstration that there is much more still to hear from this talented and charismatic outfit. Winds of change cannot not always be predicted or planned, but can often be a catalyst for bigger and greater things. Walls and Ceilings suggests exactly that.