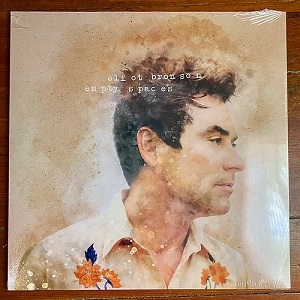 
When your love life falls apart, you may well drown your sorrows down the local bar. If you're a singer-songwriter, however, you'll more likely record a break-up album. Which, is what Bronson did when his decade-long relationship imploded with a broken engagement and, born in Baltimore, he moved from adopted Atlanta home to Nashville and set about pulling together this collection of songs about loss, redeption, the ideas of home and starting over, consciously steering away from influences like Dylan, Browne, and Waits to express himself in his own voice

After making his two previous albums with Grammy winning producer Dave Cobb, this time round he opted to co-produce with bandmate Will Robertson, recording the material in a series of live, full-band performances in the latter's basement studio.

It opens with him leaving on the forlorn sounding 'Visitor' as, accompanied by weeping pedal steel, he declares "I was just a visitor/Packing up/Tomorrow I'll leave/I was just a visitor/It was always your place/It was always your way". Despite what that might suggest there's little trace of acrimony here, the slow waltzing 'Let Me Go making it clear that this was a relationship in which the two just grew apart as he sings "You know your heart isn't in this/Let me go/Loving is hard enough to begin with/We won't win this/We both know/Let me go".

Picking up the tempo, 'Good For You' suggests his fiancée didn't know what she was looking for, leaving the city for a new rural life but still not finding ease, as he pointedly notes "If it's so good for you/Why don't you step lighter/If it's so good for you/How come everyone you're talking to/Is standing in your way", but even so so, it ends with "I hope you're happy now".

The uptempo folksy strum of 'She Loves The Mountains' elaborates the background ("She loves the mountains/More than she loves me"), though mention of a boy from California who said "the Georgia/Just ain't no place to be" adds an extra crimp as does the line "She placed a call home/But I didn't answer" as the guitar develops it into more of a Southern country swagger.

The city and the country divide that split them apart is made manifest in the following two tracks, first up the slow waltzing sway of 'Atlanta' where, softly sung reminiscent of Justin Rutledge, he recounts the start of the romance as a new kid in town ("No one's from here/But everyone comes when you call/I knocked on your door/And you let me in"), which is set against the similarly styled 'Montana' from which the line "Fuck you Montana/Your mountains in the night/Look like the edges of a knife/That cut me" sums things up fairly succinctly.

The final stretch gets introspective, capturing the emptiness left behind, made both worse but also somehow comforted by the memories, as on the simple fingerpicked 'Mountain In My Mind' ("When I sit all alone I can hear her/I used to think I was lost sometimes/Now I know that I'll always be near her"). There's acceptance, but that's not the same as letting go. Even moving on to a new start in the more muscular, drums driven 'With Somebody', he confesses "Now that I'm with somebody/I miss you more than ever", which kind of makes you wonder if he shared the songs with his new lover. Which may explain the gently rhythmically undulating title track where he sings "I've been sleeping through the night again/I guess I'm feeling alright again/I'm getting used to/Living alone, I'm getting used to/Nobody there when I come home".

It's a resolution of sorts as, quietly fingerpicked, it ends with the achingly sad but also cathartic 'Gone' which returns to the image of two people adrift from each other ("I saw a dream and chased it/Until it disappeared /I see you've got that look too" and essentially, encapsulates the pointlessness of trying to hang on when there's no longer anything to hang on to, or, as he puts it, "what do you leave/When everything is gone?"

A bittersweet reflection on love and loss that is less-pitying than It might have been, which really blames no one, except perhaps Montana's mountain allure, and, as if often the case, realises that the hurt in letting go is better than the pain of clinging on.