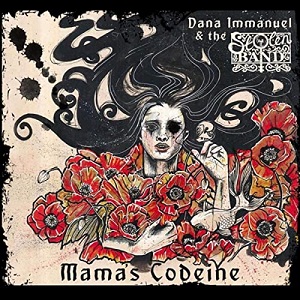 
Sultry and yet feelin' like they've escaped from a 1920s roadhouse Dana Immanuel & The Stolen Band deliver "Mama's Codeine" a five track EP that can't make up it's mind if it should stay and fight the speak-easy bust, or slip out early and set up for another night of music across the other side of easy street.

"Mama's Codeine" starts making an impression from the moment you read the track list, songs like "WD40 & Duct Tape" start to evoke an image and playing it you get the feeling that if they added that other tool box staple, the hammer, it would end up embedded somewhere it shouldn't. It also comes as no surprise to have the track followed by a cover of the murder ballad "Shady Gove".

The instrumentation on the EP is, as you would expect, exemplary Dana Immanuel, so comfortable in her playing that she's more than happy to have stolen a band of top draw musicians that take this beyond the merely good. Beyond the lead of Immanuel's well-tuned banjo you can't fail to notice the wonderful touches of the other band members, because they are given their space to shine. "Turn Up The Lights" with it's tight and dark chord structure, call and response vocals and delta overtones, being a good case in point as it draws out each musician.

The highly addictive "Mama's Codeine" bookends the EP, though at 42 seconds the reprise may not take up a lot of time, it does provide the answers and resolves a wonderful release like a cat fight in the alley. Wonderful