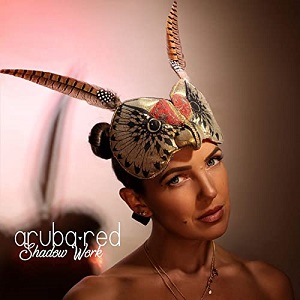 
"Wow!" was my first reaction to Aruba Red's "Shadow Work" EP. Within a minute of the opening track beginning I had recommended that my producer should buy it. It isn't easy to pigeonhole music like this, and that's a good thing because it shows that the creator has created with a freedom that then gives the listener innovation and individuality, something different and of such quality that I feel other musicians will be using this work as an influence for many years to come. It's also a work that will inspire because of the journey it describes from dark to light, the butterfly emerging from the chrysalis.

"Blue" is that opening track. It is superb, and when you hear music of such quality you feel that subsequent tracks won't hit the same heights. The triumph of this work is that all the tracks do. An equality of quality. There are shades of Kate Bush in the phrasing of a few of the vocal breaks, and you may not be able to lose that thought as you listen through. Other influences are less obvious. If you really want to put it in a box, this is probably a work of 'progressive jazz blues hip hop', although 'alternative' would probably do.

A word for the other musicians on the EP. Co-produced by bassist Renell Shaw, it features Michael Antoniou and Gordon Mills Jr. on guitars. The latter is also one of the album's percussion section who also had a hand in the production of "Shadow Work". Other percussion is provided by Camilo Tirado, who also added production skills as did Marrik Shearer. Last but not least Nathan Lee (Asian Dub Foundation) guests on flute on the final song. A truly collaborative effort for an intensely personal work.

Each of the five songs, Aruba Red says, is a 'stepping stone on the path I needed to take towards clarity and truth'. In "Blue" she is facing up to the dark times of her past. "Release Me" is an honest reflection on where she had found herself, and possibly the bedrock for her journey out. "Change" gives us an insight into the process of acceptance. "Trust" describes the eventual healing, and "Butterfly" is a metaphor for her transformation. Mental Health and Wellness are issues that we all need to grapple with to a lesser or greater degree, and in this inspiring piece of work Aruba Red has provided a platform for others who have struggled as she has.

I've often wondered how someone whose parents achieved the highest level in music (Aruba Red is one of Jack Bruce's unsurprisingly talented daughters) establishes their level in music and life, and "Shadow Work" partly answers that question. Aruba Red's music career began in some of London's open mic venues and her reputation built to the point where she held residencies at The Round House and The Southbank Centre.

An abusive marriage took her away from music for four years as she simultaneously battled anxiety, during which time she lost her father. I was lucky enough to review the Concert for Jack Bruce in which Aruba Red performs a stunning version of "We're Going Wrong" just a month or so away from the birth of her first child. She was on an emotional roller coaster that needed to be slowed to a stop, and in "Shadow Work" she may have found the means to do that. I hope so. I absolutely love it on every level. So will you.