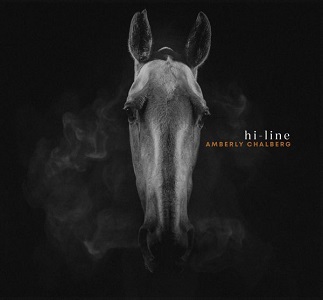 
Born in Montana and based in Denver, this is Chalberg's full length debut, building on her 2015 EP, the songs there written about her family and childhood to buoy up her father who'd been diagnosed with colon cancer. While the scope is wider, with songs dealing with relationships, although he sadly passed way this year, he'd have been equally as proud of this album, titled after their home in the Hi-Line region with the cover art symbolic of him.

Working with, among others, Lucinda Williams' rhythm section, Taras Prodaniuk and Jim Christie, she opens up in slow sway style and weary drawl with 'The Whiskey Song', written from the perspective of a man who's grown tired on his one night stands life "pickin' up the cutest things" but finding himself "kinda tired/Walkin' on a wire/Like a fucked up trapeze/With no one there to catch me".

A similar sentiment and feel's to be found in the succinctly titled 'Drunk', another tale of barroom encounters between lonely strangers and morning afters ("You say you love me. Is that the truth?/Can't live without me, moving way too soon/When the morning comes, will we regret our tongues/And the things we said, about what comes next")

The mood stays downcast and the tempo slow for 'Everything I Wanted', whiskey again poured into the lyrics, but this time in a song about loss and memories where "Everything I wanted, means nothing at all/If I can't hear your boots coming home, walk down the hall" and how the narrator's "thinking 'bout selling your old guitars/Cause suddenly they feel like they don't belong/They're as lonesome as I am without our old love songs".

Loss through a break-up is the topic in hand with 'Crazy Bout You', though, reflecting the rhythm and groove, on which, backed by slide, she comes across like Nancy Sinatra in her Lee Hazelwood era and prowling country mode, she's not prepared to accept this as the end and while "I hear you're spreading the rumor you don't miss me…If you give it time you'll realize there's a reason/Why I'm always on your mind".

Though taking the pace down again, that reluctance to let go and clinging to what was also underpins the warbling, slow building 'One Last Time' with its desperate pleas to "Let me love you one last time/Feel your heart beating in my chest/Taste the sweat running down your neck" because "you're the only sunshine that I've seen in seven months".

Digging deeper into southern bluesy country swagger, 'I'm A Little Bit Country is pretty much what you might expect, the singer discovering she might be quite good at this sort of thing ("maybe it's the thirty pack of river beer I bought/As soon as I started singing a little twang came out Where the hell did that come from?I don't sound like I thought").

But then, again sung from the male perspective, it's back to self-loathing and confessing being no good at matters of the heart ("I've fucked up every card I tried to play/I can't blame you if you're inclined to walk away") with the terrific slow and soulful Emmylou-like piano-backed ballad 'I Apologize' as she sings "I wanna say I'm sorry for every time I broke your heart/I wanna say I'm sorry for all I wish I weren't".

She shifts the lyrical viewpoint in the pedal-steel stained 'Tell Me We're Gonna Make It' to that of a child caught up their parents' embattled, abusive relationship ("Got up today after a sleepless night/Thinkin' about the fight they had last night/They battled it out, after the bottles run out/ I'm wonderin' where will we move to now?") where her father's back on the drink and "Momma's out at the bar/Meetin' lots of guy friends". It ends, heartbreakingly, some years down the line, in the lines "You haven't been in my life/Since I was just a child/Finally clean, what would you do differently?Would you say you're sorry, for forgettin' 'bout me?"

Indeed, there's precious little light to be found anywhere here, the album heading into the final stretch with the moody, dazed but waltzing, organ-backed 'Slippery Slope' ("Needles and dope/A day on cloud 9/And you're fucking for dimes/Don't recognize your own face anymore/ Empty soul, nuttin' but a whore/All of your dreams on the bathroom floor"). From here, it's musically into almost Neil Young growly rumbling rock territory with 'Family's Just A Word', another song about domestic dysfunction and betrayals ("You think you've worked this land/I don't see the dirt on your pants/Only the blood on your hands…He gave his whole damn life/To make sure that you were all right/ You look him in the eye/Then you stab him from behind").

From intimate stories, she moves to a bigger picture with the clearly politically-informed spare and contemplatively slow 'Supermoon' with its reflection on a divided nation where "Now we're just fighting/Saying hateful things/We don't mean/Like our little world/We were in together/Means nothing", with its chorus of how it "Seems like it's all gone to shit/Or has it/Are we just letting it?"

At least it ends on a musically upbeat note with 'Wishing Well' and, even if it's another song about romance not turning out as hoped ("we got lost along that windy road/So, goodbye my baby from the bottom of my broken heart"), it at least does so without bitterness and an optimistic outlook in "I will always wish you well/Never forget when the stars fell/When I throw my pennies in/I'll be hoping that we meet again".

There are, perhaps, rather too many songs with expletives to find the home it deserves on roots and country radio stations, but nevertheless it's an auspicious and confident debut that suggests we'll be hearing a lot more from her in the future.